This is a book review for Bernard Cornwell’s Enemy of God: A Novel of Arthur. It is the second in a series called The Warlord Chronicles or sometimes the Arthur Books. Notice it does not say King Arthur. Cornwell has a different take on these legends and characters. I really enjoyed this book, and I am giving it a five star rating. This review does have a few plot spoilers, but I will keep them as vague as possible. 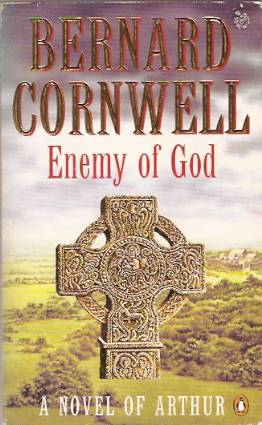 There was so much I liked about it. I liked being in England in the Dark Ages – or what we now call the Dark Ages – at a time when Christianity was not yet the dominant religion in England but was a rising force. It was also a time when people still believed in magic, spells and charms, and sometimes believing in it might have been enough to make wondrous things happen.

Cornwell pulls off two difficult moves. First, presenting “the truth behind the legend” in a plausible fashion. He recreates these characters and stories as they were before they got embellished and whitewashed, or as Arthur says, “Before we paid the bards to make our squalid victories into great triumphs, and sometimes we even believe the lies they sing to us.” As an aspiring author, I was impressed with this. Second, he doesn’t lose me when normally I would be thinking, wait that’s not how Lancelot is supposed to be, or wait, Arthur is supposed to be king. He stopped those responses from me even before they began. I think the reason is the narrator. He tells this story through Derfel (pronounced Der-vel), a knight and close friend of Arthur. Derfel is now an old man, and he is telling the story as he remembered it. Incidentally, it was the same way Anita Diamant was able to change the Old Testament story of Dinah in The Red Tent.

There is one disadvantage in this approach. You lose some suspense. When Derfel is in a dangerous situation, you already know he’s going to survive because he’s alive to tell the tale. But I think what he gains in believability makes it worth the trade off. I don’t know any other way Cornwell could make changes in such a familiar story. Using an older Derfel as the narrator makes it plausible because he has the credibility of an eyewitness. It also makes it more interesting in some ways, because you know some details are going to be the same and some different. You’re constantly watching to see how the “real” story compares with the legend.

I haven’t said King Arthur because Arthur is not a king. Mordred is the king of Dumnonia and Arthur’s half-nephew (if there is such a term). Arthur and Derfel are charged with protecting the boy Mordred and keeping order until he is old enough to rule as king. Derfel and others who follow Arthur think he should be king, while Arthur dreams of a quiet retirement as a farmer. Guinevere, on the other hand, wishes Arthur had more ambition. Her drive for power is going to have more impact on the story than you will imagine.

Lancelot is a king and far from being a hero or the greatest knight of Arthur’s roundtable. Merlin is a druid, and he is trying to recover the treasures of Britain. He takes Derfel on a quest to find one of those treasures, a magic cauldron. Merlin believes if the treasures are recovered, the old gods of Britain will walk the earth again.

And it’s not just the old gods that have a stake in Britain’s future. Because of leftover Roman influence, some foreign gods are still worshipped. Guinevere is a worshiper of Isis. Derfel is a Christian but belongs to a society of Mithras. And some Christians are especially troublesome because this story takes place between 490 and 496, and they believe 500 is the year of Armageddon. They believe they must get the world ready for the return of the Lord. In order to do that, they try to rid Britain of all traces of paganism. They go around destroying temples, burning villages, and torturing and killing pagans. They try to purify themselves by self-flagellation.

The Christians are not all bad, but they are often not the good guys in this story. And we have to be willing to admit, historically, that has often been the case. However, I think more than a knock on Christianity, it illustrates that when people believe the world is about to end, they will do things they would not do otherwise.

Arthur is caught in the middle between the traditional religion and Christianity. He is a Christian but does not take up the cause against the pagans. Because of this, Christian extremists call him the enemy of God, hence the title of the book. Instead of a religious crusade, Arthur wants to create a national identity for the Britons so they can unite against foreign invaders, like the Saxons and the Belgians. He creates the roundtable toward this end, though most of the names we are familiar with are missing.

Oh yes, the names. They are difficult. Because Arthurian legends were originally Welsh stories, Cornwell decided to keep most of the Welsh names for an authentic feel. Once you get past familiar ones like Arthur, Merlin, and Guinevere, the names are almost impossible to pronounce. I run into the same problem writing about Rome. The most common complaint I get is, These Roman names are difficult to read. And let me tell you, Roman names are child’s play compared to Welsh names. So I suggest the same trick many people use for Biblical names: Just make something up and move on. No one will care that you cheated.

But what really thrilled me was what Lancelot did to try to claim the throne of Dumnonia away from Mordred. Up until then, I would have given it four stars. It was a great story, well written, and I was enjoying it, but when that happened, holy crap! That was a twist worthy of Game of Thrones. That’s when it became a five star novel for me.

I mentioned this is the second book in a series. I haven’t read the rest of the series yet. So why did I read the second book first, you ask? I am part of an online book club of Ancient and Medieval Historical Fiction. Last year, the theme was “second book.” One thing I’ve learned in this experience is with some series, you can read books out of order, and you don’t lose much. The second thing is sometimes the second book is better than the first, so the first book of a series may not always give you the best of what an author has to offer. So far, I’ve found this to be true of the Roma Sub Rosa series and the Saxon Tales series.

I see two reasons for this. First, I think sometimes the author becomes a better writer after the second book. There are lessons learned from that experience that you can carry with you when you write your second book. Second, in some cases, the main characters become better developed as the series progresses. I definitely thought that was true of the Harry Potter series. I know some H. P. fans are going to disagree with me, but I liked the books toward the end better than the ones in the beginning. I saw J. K. Rowling’s writing style and storytelling technique get better with each book, and what she did with the final book, Deathly Hallows, was absolutely amazing.

So now I’m not sure if I want to read the first book of this series or not. But if you are interested, volume 1 is called The Winter King, and volume 3 is called Excalibur, which I will be reading as soon as I can fit it into my schedule.