I was asked to give a devotional for the June 24, 2017 meeting of the South Carolina chapter of American Christian Fiction Writers (ACFW). The pattern they prefer is 1) a bible verse, 2) reflection from personal testimony or other illustration, 3) a lesson learned or life application, and 4) a prayer. I chose to draw from the story of David and Goliath.

David put his hand in his bag, took out a stone, slung it, and struck the Philistine on his forehead. The stone sank into his forehead, and he fell face down on the ground (1 Sam 17:49).

I remember when the writing bug bit me. I thought about Jesus and the sinful woman, and something stirred in me. I grabbed a pen and notebook and started writing the story as if Jesus were telling it. I didn’t think about it. I wouldn’t even have attempted it if I had. But somehow the story just flowed out of me. I looked at it and realized I had to be a writer.

After that, it was like I was on a writer’s high. I wrote constantly and thought everything on the pages was brilliant. I would write, look at it, and I was like, “I can’t believe I wrote this.”

Some months later, the high wore off. As I studied more about what makes good writing, I found my clever turns of phrase were really clichés. My profound comments on the human condition were breaking connection with my POV character. My masterpieces were filled with rookie mistakes. Weak verbs, info-dumps, irrelevant details, characters that were spokespersons for my beliefs rather than real people, not enough emotion and suspense, too much internal dialogue, tell don’t show. And I looked at it, and I was like, “I can’t believe I wrote this.” Not in the good way. I was writing, but I still had a lot to learn about the craft of writing publishable stories.

We’ve all heard the story of David and Goliath. Do you remember that when David told Saul he would fight the giant, Saul gave him his armor and weapons? And what happened? That’s right. He did not take it. The armor probably didn’t fit. Don’t forget Saul was the tallest man in Israel. That’s why they wanted him to be king. And David had never worn armor or used a sword or spear. So he went into the fight with what he knew, a sling and five smooth stones from the brook. 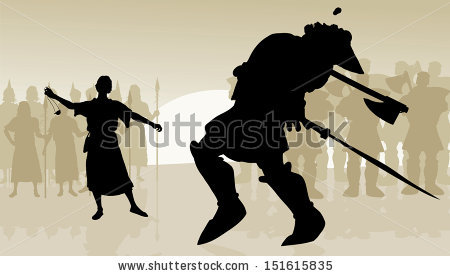 But after that initial glory, David would be called upon to lead the armies of Israel. He had to learn new skills and techniques. He had to learn how to speak in a commanding and inspiring manner, make battle plans, lead marches, choose terrain for battle, maneuver units to outflank the enemy, coordinate infantry, chariots, and slingers, and start wearing the armor and using the sword and spear he had not been ready to use against Goliath.

As writers, we will probably never be called upon to lead armies or kill giants. Unless we want to write stories about them. But like David, this calling to be a writer will require we learn new skills and concepts like, plotting, characterization, style, dialogue, creating scenes, how to work in description and backstory without bringing the action to a screeching halt, and what exactly does “Show don’t tell” mean?

So if you find yourself annoyed with all the technical stuff about writing, think about David. He may have had moments when he pined for his sling and a giant to take down. But after Goliath, there were no more giants. If he was going to make the transition from baddest slinger in the Middle East to commander of the armies and eventually to king of Israel, it was time to put his sling down, put his armor on, and practice with his sword and shield. And also like David, whatever new adventures writing brings you, keep your faith in God.

Prayer: Lord God, thank you for your gift of the written word. Bless this ACFW chapter to train and equip these people gathered here to make the most of their gift and calling, so that we may point others to the light of Christ. And it’s in his name we pray. Amen.